ICEC continues to broaden its outreach through the establishment of Twinning Programs and individual mentoring partnerships. It has joined UICC as a full member and continues to serve as a participating member of the Global Health Council, the Global Health Security Roundtable, the NCD Alliance and the NCD Roundtable. Staff and Board members routinely attend and participate in conferences, meetings and other opportunities to engage with the global community in efforts to reduce disparities in the delivery of cancer care.

Outreach efforts this past year include: 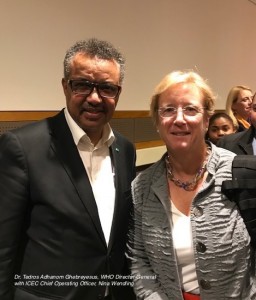 Young Investigators’ Conference: Pioneering Action for Global Cancer Care
On February 14-15, 2019, ICEC will launch its inaugural symposium, “Pioneering Action for Global Cancer Care” to be held at the National Academies of Sciences in Washington, D.C. The conference will bring together young healthcare professionals who are recognized as key players in global oncology to facilitate the exchange of ideas and foster collaborations as they present updates on their international efforts to better understand, prevent and treat cancer. Dr. Douglas R. Lowy, Deputy Director of the National Cancer Institute, will deliver the keynote address. ASCO’s Journal of Global Oncology has agreed to publish several articles based on key themes of the conference that will be authored by ICEC Early Career Leaders.  This opportunity will extend the impact of the conference and will contribute to knowledge regarding the greater global oncology community. 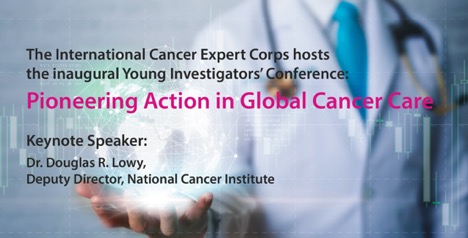 The symposium will provide an opportunity for young cancer professionals from diverse regions to share and discuss the unique opportunities and challenges that they encounter at their home institutions and practices as well as abroad. The conference will highlight their efforts related to mentorship, education and training while guiding systematic incremental improvements in cancer care delivery programs in low- and middle-income countries. What is now needed is a bona fide career path for global oncology, a key topic of this conference building on Danielle Rodin et al. “Global Health in Radiation Oncology: The Emergence of a New Career Pathway, Semin Radiat Oncol. 2017 Apr;27(2):118. We are proud of the ability of ICEC’s young investigators to carry the baton of the prevention and treatment of cancer to where on-the-ground cancer treatment is most needed.

It is recognized that for ICEC to achieve its goals, metrics of progress and success are essential. Currently, ICEC works with nearly 30 affiliated ICEC Twinning Programs and mentoring partnerships in efforts to improve the quality of care delivered in underserved regions using protocols and a set of specific metrics reflected in ICEC’s 5-Step Progression Plan for Cancer Care. The aim is for a participating care delivery site to meet the metrics outlined with the aim to pass an international accreditation and participate in international clinical trials. The ICEC 5-Step Progression Plan for Cancer Care received official copyright registration from the United States Copyright Office in June 2018. Copies of the plan can be ordered from ICEC. Send requests to info@iceccancer.org. 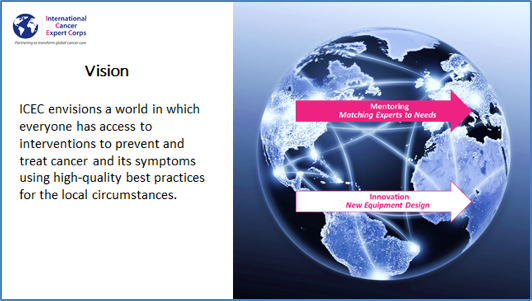 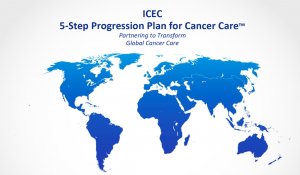 ICEC: Working on two closely related pathways: mentoring and innovation in the application of technology.
The need for robust, first-rate radiation treatment systems capable of functioning in the challenging environments encountered in many developing countries is another well-recognized global need. For the last 3 years, ICEC has been working to identify solutions to address this complex issue through hosting workshops and meetings in the US and in Europe.

The first workshop, sponsored by ICEC and hosted by CERN on November 7-8, 2016, entitled “Design Characteristics of a Novel Linear Accelerator for Challenging Environments”, is summarized in an article in Radiotherapy and Oncology (Pistenmaa DA et al. Changing the global radiation therapy paradigm. Radiother Oncol (2018), https://doi.org/10.1016/j.radonc.2018.05.025) 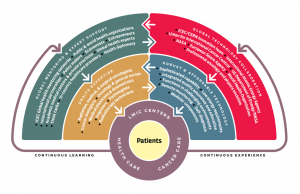 Following the second international workshop hosted by CERN on October 26-27, 2017, entitled “Innovative, Robust and Affordable Medical Linear Accelerators for Challenging Environments” that was sponsored by ICEC and STFC, five work packages corresponding to major discussion topics at the workshop were funded by STFC (approximately L60,000 each). Progress on the five work packages was reported at the workshop hosted by STFC in Sutton, UK, on March 22-23, 2018, entitled “Burying the Complexity: Re-engineering for the Next Generation of Medical Linear Accelerators for Use in Challenging Environments”, that was sponsored by CERN, ICEC and STFC. This work is continuing thanks to a modest increase in funding from STFC. Application for further UK funding in conjunction with ODA, ICEC and CERN. The Global Cancer Research Fund Accelerator Design Study (GCRF ADS) team headed by Peter McIntosh at the Daresbury Laboratory and the Global Radiotherapy Access in Challenging Environments Network (GRACENet) and is being led by Suzie Sheehy (PI) and Co-Investigators Ajay Aggarwal and Simon Jolly.

A follow-up workshop is being organized by STFC and will take place in Gaborone, Botswana in March 2019 to achieve even greater participation by people from ODA countries.

ICEC CENTERS AND ASSOCIATES/HUBS AND EXPERTS

In addition to the ICEC 5-Step Progression Plan for Cancer Care©,  ICEC continues to support the piloting and use of the National Comprehensive Cancer Network (NCCN) Framework for Resource Stratification of NCCN Guidelines (NCCN Framework™) and the NCCN Harmonized Guidelines™ for Sub-Saharan Africa.

All of these resources are particularly valuable tools to be used in LMICs and other challenging environments. ICEC appreciates the unique opportunity to work toward formal guideline and protocol development with an expert group and one connected closely with the major academic cancer centers.

To make a donation to support any of these grants or to make a contribution for general support of ICEC, please visit the ICEC website’s donation page.

RECOGNITION/IN THE NEWS
Norman Coleman received The Ellen L. Stovall Award for Innovation in Patient-Centered Cancer Care, awarded by the National Coalition for Cancer Survivorship, in honor of Ellen Stovall, a founding board member of ICEC and a longtime CEO of NCCS who passed away in 2016. The Stovall Award is awarded annually to individuals, organizations, or other entities who demonstrate innovation in improving cancer care for patients in America. Dr. Coleman’s efforts and innovative approaches to improve cancer care for individuals in the US and worldwide are detailed in this tribute video produced by NCCS. 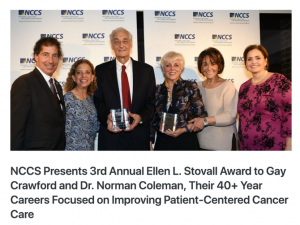