Founded in 1954 by 12 European countries, the European Organization for Nuclear Research, better known as CERN (in French, Conseil Européen pour la Recherche Nucléaire) is the world’s largest particle physics laboratory with approximately 15,000 users coming from its 23 Member States and over 100 countries from around the world. By bringing together the creativity of many scientists from different nationalities, backgrounds and technical fields of research, CERN has been and continues to be a source of knowledge, technological innovation and technology creation.

CERN is open to scientists from all nations irrespective of their system of government, some from countries that are opponents on the political stage. During the Cold War, CERN served as a bridge between East and West and in 2012, CERN became an observer to the United Nations (UN), serving as a leading voice for global science. In cooperation with the UN, CERN provides the IT infrastructure that allows the UNOSAT programme to be at the forefront of satellite-analysis technology, e.g. for disaster-risk reduction or regional capacity development. CERN has also helped to build the SESAME light source in Jordan, which follows the CERN model and promotes scientific collaboration in the Middle East.

Particle physics seeks to understand the formation and structure of the universe at its most fundamental level and its evolution since the very beginning. The instruments used at CERN are purpose-built particle accelerators and detectors. Advanced particle accelerators, cutting-edge particle detectors, and sophisticated computing techniques are the hallmarks of particle physics research which needs very highly specialised instruments using technologies and requiring performance that often exceed the available industrial know-how. From this the necessity arises for researchers to innovate, invent, and develop tools, techniques, and technologies to carry out this mission.

Several important achievements in particle physics have been made through experiments at CERN. They include:

The LHC (Large Hadron Collider),  the world’s highest-energy particle accelerator and one of the most complex experimental facilities is the latest addition to CERN’s accelerator complex. The LHC consists of a 27-kilometer ring of superconducting magnets with a number of accelerating structures to boost the energy of the particles along the way.

The LHC was built at CERN between 1998 to 2008 in collaboration with scientists and engineers from over 100 countries globally. See Figure 1 for the diagram of the CERN accelerator complex. 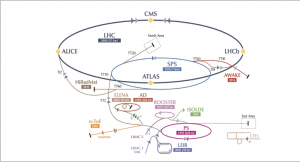 Figure 1:  The accelerator complex at CERN is a succession of machines that accelerate particles to increasingly higher energies. Each machine boosts the energy of a beam of particles, before injecting the beam into the next machine in the sequence.

The LHC started to run in  2008  and in  2012, ATLAS and CMS announced they had each observed a new particle consistent with the Higgs boson the particle that was the final missing piece of what is referred to as the Standard Model of particle physics.

In 2013, the Nobel Prize for Physics was awarded jointly to François Englert and Peter Higgs “for the theoretical discovery of a mechanism that contributes to our understanding of the origin of mass of subatomic particles”. In addition to the Higgs Boson discovery, the technological advances needed to realise the LHC and its experiments have driven numerous other developments in a range of domains, including those of imaging and radiation therapy.

In collaboration with groups worldwide,  CERN is upgrading the LHC to an order of magnitude Luminosity by 2026 and is investigating two main concepts for future accelerators: A linear electron-positron collider with a new acceleration concept to increase the energy (CLIC) and a larger version of the LHC, a project currently named Future Circular Collider

The ambitious scientific goals of high energy physics require cutting edge instruments and innovative technologies that have applications in many other fields.