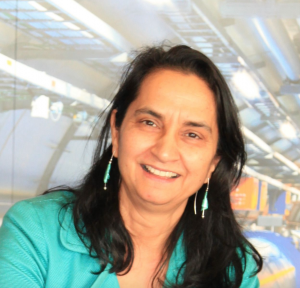 After joining CERN in 2000, Manjit has focused on applying the technologies developed for particle physics to the life sciences domain. She played a key role in launching the European Network for Light Ion Hadron Therapy, a multidisciplinary platform that takes a collaborative approach to particle therapy research in Europe, which she has coordinated since 2006.

In 2010, Manjit helped launch the first-of-its-kind multidisciplinary workshop, “Physics for Health in Europe” which led to the successful biannual International Conference on Translational Research in Radio-Oncology and Physics for Health (ICTR-PHE). This forum was the first place where ICEC presented the concept that has now become Project STELLA.

In addition, she is actively involved in helping non-profit health and science education and gender related organizations in Geneva and served for nearly 20 years for the Graduate Women International and currently represents the International Cancer Experts Corps. She is actively involved in working groups for health and STEM for the NGO Committee on Status of Women Geneva. She was the editor of the NGO-CSW Geneva Beijing+20 Platform outcome report. She is on the board of directors for ICEC based in Washington DC, where she is actively involved in addressing the lack of access to cancer treatment in LMICs. Manjit has lectured often on the intersections of health, human rights and equality, including in the context of the SDGs .