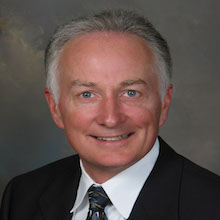 Dr. Johnson was Chief of Radiation Oncology at Baptist Medical Center Jacksonville from 1995-2003, Chairman of the Institutional Review Committee there from 2001-2004, and Chief of Staff at the Medical Center from 2004-06. He has been the Vice-President–Programs for the American Cancer Society in Duval County, and served as Vice President for Clinical Affairs for the national Oncure Medical Corporation from 2011-13. Dr. Johnson is Board Certified in both Radiation Oncology and Hospice and Palliative Care Medicine, and has held two faculty appointments: first with Stanford University as a Clinical Instructor in Radiation Oncology, and currently as an Assistant Professor of Oncology with the Mayo Medical School.

Dr. Johnson has a major interest in clinical cancer research, having been a Principal Investigator for the Radiation Therapy Oncology Group and Children’s Oncology Groups, and for 28 years headed up the FROG and Oncure research programs. His clinical interests include stereotactic radiosurgery, prostate brachytherapy, breast, and pediatric cancers, as well as early lung cancer detection via breath analysis. He serves on national research strategy committees and has authored numerous protocols, as well as over 60 scientific publications. Dr. Johnson and his group have successfully developed integrated cancer clinics in small communities and were founders of the Integrated Community Oncology Network in northeastern Florida. He has also served as a Quality Control consultant to the Nuclear Regulatory Commission, and as a member of the Radiation Therapy Alliance, providing the Centers for Medicare & Medicaid Services with novel strategies for clinical cancer care payment bundling.