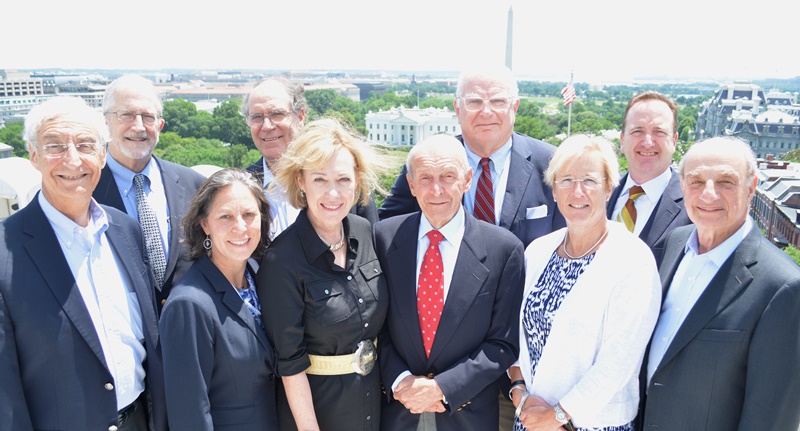 On June 1, 2016, the International Cancer Expert Corps Board of Directors hosted the first in a series of receptions, “Partnering to Transform Global Cancer Care” at the law offices of Baker & McKenzie, LLP in Washington, DC. The purpose of the event series is to introduce the efforts of the organization to friends and colleagues in the corporate, scientific, governmental and philanthropic communities.  The venue, perched just above Lafayette Park overlooking the White House, the Washington Monument, and the Jefferson Memorial, served as an idyllic setting for the ICEC’s first of several introductory gatherings.

This well-attended event, made possible through the generous support of Baker &McKenzie, LLP and the Princess Margaret Cancer Centre in Toronto, Ontario, attracted a broad range of individuals. Attendees included representatives from the Alberta First Nations Information Governance Center, Chang Gung Memorial Hospital- Taiwan (CGMH), Consortium of Universities for Global Health (CUGH), National Nuclear Security Administration, National Cancer Institute (NCI) and many others. Many of the organizations represented at the reception are listed below. The evening was highlighted by a short program which included overviews of several programs focused on global health. Keith Martin, MD, the Executive Director of the Consortium of Universities for Global Health (CUGH) reflected on the importance of collaborations in efforts to make substantive improvements in global health initiatives. The CUGH is located in Washington, DC and is a stalwart supporter of the ICEC.

Daniel G. Petereit, MD, of the John Vucurevich Cancer Care Institute at the Rapid City Regional Hospital in South Dakota, shared his experiences as the Principal Investigator of the community-based participatory research program, “Walking Forward” in western South Dakota. The program is funded by the National Cancer Institute’s (NCI) Center to Reduce Cancer Health Disparities (CRCHD) and lauded as an exemplary program proving that high-quality mentoring networks do improve both access to, and the quality of care delivered to indigenous populations in underserved areas.

Lastly, Dr. Surbhi Grover, MD, MPH, one of ICEC’s Early Career Leaders and an Assistant Professor of Radiation Oncology at the Hospital of the University of Pennsylvania and the principle lead for the Botswana-UPENN partnership, highlighted many of the successes and challenges she has faced while developing an oncology program in Gaborone, Botswana. Though she has experienced many trials and tribulations, her efforts and the efforts of others have served as a catalyst to make a significant difference in the delivery of cancer care in Sub-Saharan Africa.

ICEC will host the next reception in October 2016 in New York City. Details will be posted on the ICEC website. To attend or to sponsor an upcoming event, or for more information on the 2016 ICEC Partnering to Transform Global Cancer Care reception schedule, please contact ICEC at development@iceccancer.org.

ICEC hosted second in a series of receptions: “Partnering to Transform...
Scroll to top