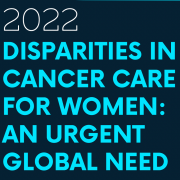 Watch the recorded presentation at this link

Disparities in Cancer Care for Women: An Urgent Global Need

When it is detected early and treated effectively, cervical cancer—the fourth most common cancer in women—is one of the most highly curable cancers. In the United States (U.S.), the rate of infection and death from cervical cancer has decreased significantly in the past 40 years, due to increased screening, including for the human papillomavirus (HPV), which causes the cancer; the HPV vaccine; and access to radiation therapy—which is the foundation for curative treatment for advanced cancers.

In low- and middle-income countries (LMICs), where access to radiation therapy is scarce or non-existent, the story is starkly different. For a young woman in Tanzania or Ethiopia, for example, a diagnosis of cervical cancer is likely to be a death sentence. Left untreated, she will suffer a long and painful illness. She can lose bladder and bowel function and be ostracized from her family and community—sent away to die alone.

The impact of her death is devastating in other ways: since cervical cancer is most often diagnosed in women under 50, children of these women are often left as orphans and neglected resulting in additional needless suffering and deaths. In LMICs, successfully treated breast cancer also depends on the availability of radiation therapy. The BBC reported last summer from Zimbabwe on 44-year-old Tendayi, who began a course of radiation therapy after undergoing breast-conserving surgery and chemotherapy for stage III breast cancer. When the radiation therapy machine broke down, she was told the only way it could be fixed was to fly in an engineer from South Africa which can take months. Without timely radiation treatment, her oncologist told her that she should start thinking about having a mastectomy as her only remaining option.

Unfortunately, Tendayi’s story is all too common among women in LMICs where radiation therapy technology breakdowns and long servicing delays are the norm or where it is not available at all. The lack of access to cancer care contributes to staggering outcomes, with nine of 10 cervical cancer deaths and seven of 10 breast cancer deaths occurring in LMICs. Overall, LMICs bear the burden of 70 percent of cancer deaths.

With more than 18 million new diagnoses of cancer worldwide in 2018 and more than nine million cancer deaths, and with new cancer cases expected to reach 27 million by 2040, the need to improve access to treatment, especially radiation therapy, that can extend and save millions of lives has never been more critical.

Donna O’Brien, MHA
Donna O’Brien is President of Strategic Visions in Healthcare, LLC, a healthcare consulting firm specializing in healthcare strategy, population health, cancer program and translational research program expansion, and facilitation of strategic partnerships. Building upon her extensive healthcare management experience she launched this firm in 2005.  Strategic Visions has clients across the U.S. including health systems, academic medical centers, research institutes, and government. She is a member of the Board of Directors of the International Cancer Expert Corps.

Manjit Dosanjh, PhD
Dr Dosanjh has had a long career at CERN where she served as Director of Medical Applications and played a key role in launching the ENLIGHT (European Network for Light Ion Hadron Therapy). She has a PhD in Biology is on the faculty of the University of Oxford and she has served as a mentor and advisor for many students from across the globe.  Her work has included many initiatives to expand access to care for those in Low Middle-Income Countries and for advancing career opportunities for women in science. She is a member of the Board of Directors of the International Cancer Expert Corps and project leader of STELLA.

Silvia Formenti, MD
Dr Formenti is the Chair of Radiation Oncology at Weill Cornell Medical College/Weill Cornell Medical Center. She is a recognized leader in breast cancer research and her groundbreaking work has transformed the paradigm in radiation biology, demonstrating the efficacy of combining radiotherapy with immunotherapy to control cancer cell growth in solid tumors.   She has been a champion of efforts to improve access to care for underserved populations and her research includes studying the impact of cancer in women in LMICs on families. She is a member of the Board of Directors of the International Cancer Expert Corps.

Surbhi Grover, MD, MPH
Dr Grover is a Radiation Oncologist at the University of Pennsylvania’s Abramson Cancer Center.  Her research interests include racial and ethnic disparities in cancer care and outcomes, HIV-related malignancies, implementation and up-scaling of prevention and treatment programs in low resource settings.  Since 2011 she has been engaged with the UPENN Botswana partnership and is currently serving as Gynaecological cancer clinic director and Oncology Consultant at the Princess Marina Hospital in Botswana.

Daniel Petereit, MD, FASTRO
Dr Petereit is a Radiation Oncologist at Monument Health in Rapid City South Dakota. He is the founding Director of the NCI-funding “Walking Forward” Program in South Dakota which serves the American Indian population on reservations in South Dakota. He has served as President of the American Brachytherapy Society and championed global health programs. He is a member of the Board of Directors of the International Cancer Expert Corps.

Rohini Batia, MD
Rohini is currently a PGY-3 resident in Radiation Oncology at Johns Hopkins University. She is interested in working to mitigate disparities in access to quality oncologic care in resource-limited settings. She graduated with a degree in Epidemiology from the University of Rochester and was a Fulbright-Nehru Scholar in Delhi where she investigated predictors of tobacco use among women. She has worked with Dr. Surbhi Grover since 2015 on a variety of projects, including quantifying delays along the patient care continuum in oncology. She has worked with the multidisciplinary women’s clinic in Gaborone helping to pilot test a new smartphone application and refine clinic workflow and is currently working on understanding the uptake of hypofractionationed radiation therapy in low resource settings.

50. Vision 2020: looking back and thinking forward on The Lancet Oncology C...

Women in STEM: Mind the Gap. Watch the panel presentation delivered at the Sixty-Sixth...
Scroll to top