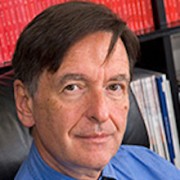 René-Olivier Mirimanoff obtained his MD degree at the University of Geneva, Switzerland in 1973. After residencies in internal medicine and oncology in Philadelphia (USA), Lausanne and Geneva (Switzerland), he did all his residency training in radiation oncology (RO) at MGH (Harvard), Boston (USA), where he graduated. He passed his American Boards in 1984. After being on the staff in Geneva (1984-1988), he was appointed as Professor and Chairman in radiation oncology (RO) at CHUV (University Hospital) in Lausanne in 1988. Under his direction, his Department underwent major changes, with full academic staffing and cutting-edge equipment, to become a significant EORTC (European Organization for the Research and Treatment of Cancer) contributor. Since July 2012, he is Emeritus Professor at the University of Lausanne Faculty of Medicine, and in October 2012, he joined the Radiation Oncology Center at Clinique de la Source in Lausanne.

An enthusiastic clinician, his research focuses on clinical investigation, his main interests and contributions being on brain, lung and rare tumours. Notably, he was the RO responsible and co-chair of the pivotal RT-Temozolomide trial in glioblastoma. His list of publications comprises over 220 papers, of which 187 in peer-reviewed journals, including NEJM, Lancet, Lancet Oncology, JCO, EJC, the “red” and “green” journals etc.

His is member of a number of international scientific societies, reviewer and board member of several journals. He is Founding Member and first President of the Scientific Society of Swiss Radiation Oncology (SASRO), founder of the “Rare Cancer Network” (RCN), and a former Chairman of the EORTC Radiation Oncology Group (ROG). At the European Society of Therapeutic Radiology and Oncology (ESTRO), he was member of the Scientific Committee, and still an ESTRO Course Teacher. He is a regular reviewer of research grants in the European Community (EC) and Switzerland.

Dr Mirimanoff is Honorary Professor at the Chinese Academy of Medical Sciences (CAMS) and Cancer Institute in Beijing (2005), Honorary Member of SASRO 2005, medal holder of the French Society of Radiation Oncology (2006), Emmanuel van der Schueren lecturer and medalist in 2008 at the Belgian Society of Radiation Oncology, Alumnus of the Year recipient (2010) at Massachusetts General Hospital, Harvard University, Boston, and was awarded the ESTRO lifetime achievement award in 2010. He will receive the Golden Hippocrates Award in 2016.