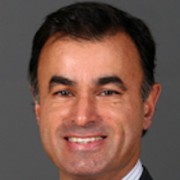 Dr. Martin is a physician who, since Sept. 2012, has served as the founding Executive Director of the Consortium of Universities for Global Health (CUGH) based in Washington, DC. The Consortium is a rapidly growing organization of over 130 academic institutions from around the world. It harnesses the capabilities of these institutions across research, education, advocacy and service to address global challenges. It is particularly focused on improving health outcomes for the global poor and strengthening global health programs.

Between 1993-2011, Dr. Martin served as a Member of Parliament in Canada’s House of Commons representing a riding on Vancouver Island. During that time he held shadow ministerial portfolios in foreign affairs, international development, and health. He also served as Canada’s Parliamentary Secretary for Defense. His main areas of focus are in global health, foreign policy, security, international development, conservation and the environment. He is particularly interested in building and retaining capacity in low-income settings and scaling up proven interventions that improve environmental and human security. As a parliamentarian, Dr. Martin created CanadaAid.ca, an online platform to facilitate partnerships between universities, governments, multilateral institutions, NGOs, and the private sector. In 2006, Dr. Martin founded Canada’s first all-party Conservation Caucus in Parliament and developed the online conservation site, www.icforum.info to mainstream sustainable conservation and environmental practices into development initiatives to achieve positive outcomes for the environment and people.  Dr. Martin has been on numerous diplomatic missions to areas in crisis including Sudan, Zimbabwe, Mali, Niger, Sierra Leone, Colombia, and the Middle East. He served as a physician on the Mozambique border during that country’s civil war. He has travelled widely in Africa, visiting the continent 26 times. Dr. Martin is the author of more than 150 editorial pieces published in Canada’s major newspapers and has appeared frequently as a political and social commentator on television and radio. From 1997-2000, he created and moderated the nationally syndicated, current affairs television program, Beyond Politics. He is a board member of the Jane Goodall Institute, editorial board member, for the Annals of Global Health and an advisor for the Int’l Cancer Expert Corps. He has contributed to the Lancet Commission on the Global Surgery Deficit, and is a current commissioner on the Lancet-ISMMS Commission on Pollution, Health and Development and a member of the Global Sepsis Alliance.  Dr. Martin is based in Washington, DC, which is the home of CUGH’s Secretariat.