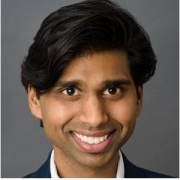 Sandeep Kishore is training to be a physician-scentist in public health at the Yale School of Medicine.

He most recently served as a post-doctoral fellow at Harvard Medical School where he directed the Young Professionals Chronic Disease Network (YP-CDN), a global network of 2000 young professionals from over 130 countries committed to the equitable prevention and treatment of non-communicable diseases (NCDs) as a social justice issue. In this capacity, he served as a delegate to the United Nations General Assembly in 2011 and delivered a TED talk at TEDMED 2012 on new approaches to global chronic disease.

He received his Ph.D. from Cornell University, where his dissertation focused on the evolution of malaria parasitism in humans and for which he was awarded the national Raymond W. Sarber award for most outstanding graduate student in microbiology. He has worked to amend the World Health Organization’s Essential Medicines List which facilitates access to low-cost medicines for free or the cheapest prices possible. He helped add cholesterol-lowering statin drugs to this global list.

His work on innovation and access to health goods has been featured in the popular press (Scientific American, The Huffington Post and The Scientist), as well as in scholarly journals and textbooks including JAMA, The Lancet, the Nature Reviews series and PLoS Medicine. He is on the Medical Review Board of The Huffington Post and Associate Editor at the journal Globalization & Health.

He is a graduate of Duke University (B.S.) and Oxford University (M.Sc.), and is the first The Lancet awardee for community service. He is a Fellow at MIT’s Dalai Lama Center for Ethics & Transformative Values and a recipient of the Paul & Daisy Soros Fellowship for New Americans. He completed his M.D. at Cornell’s medical college in 2014.