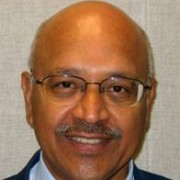 Dr. Vikram received his medical degree from the University of Delhi and trained in radiation oncology at Memorial Sloan-Kettering Cancer Center in New York City. He subsequently served on the faculties of Memorial Sloan-Kettering, Cornell University Medical College and Mount Sinai School of Medicine. From 1992-2003 he served as Professor and University Chair of the Department of Radiation Oncology at the Albert Einstein College of Medicine and Radiation Oncologist-in-Chief at the Montefiore Medical Center in New York City.

From 2003-2006 he served on the ACGME Residency Review Committee for Radiation Oncology. He has authored over 150 scientific publications and was listed as among the 1000 ‘Best Doctors in America’ by American Health magazine, a Reader’s Digest publication.

From 2002-2006 he worked at the International Atomic Energy Agency of the United Nations in Vienna, Austria, helping to establish or upgrade cancer therapy facilities in about 100 low and middle income countries, and founded the Program of Action for Cancer Therapy (PACT). In 2005 he shared in the Nobel Peace Prize awarded to the IAEA whose contribution to global cancer control was cited by the Nobel committee.

Since 2006 he has served as Chief of the Clinical Radiation Oncology Branch at the NCI, overseeing a portfolio of clinical research grants within the Radiation Research Program as well as assisting the Cancer Therapy Evaluation Program and the Coordinating Center for Clinical Trials with NCI’s cooperative clinical trials groups program. He also continues his work on improving cancer prevention and control worldwide.